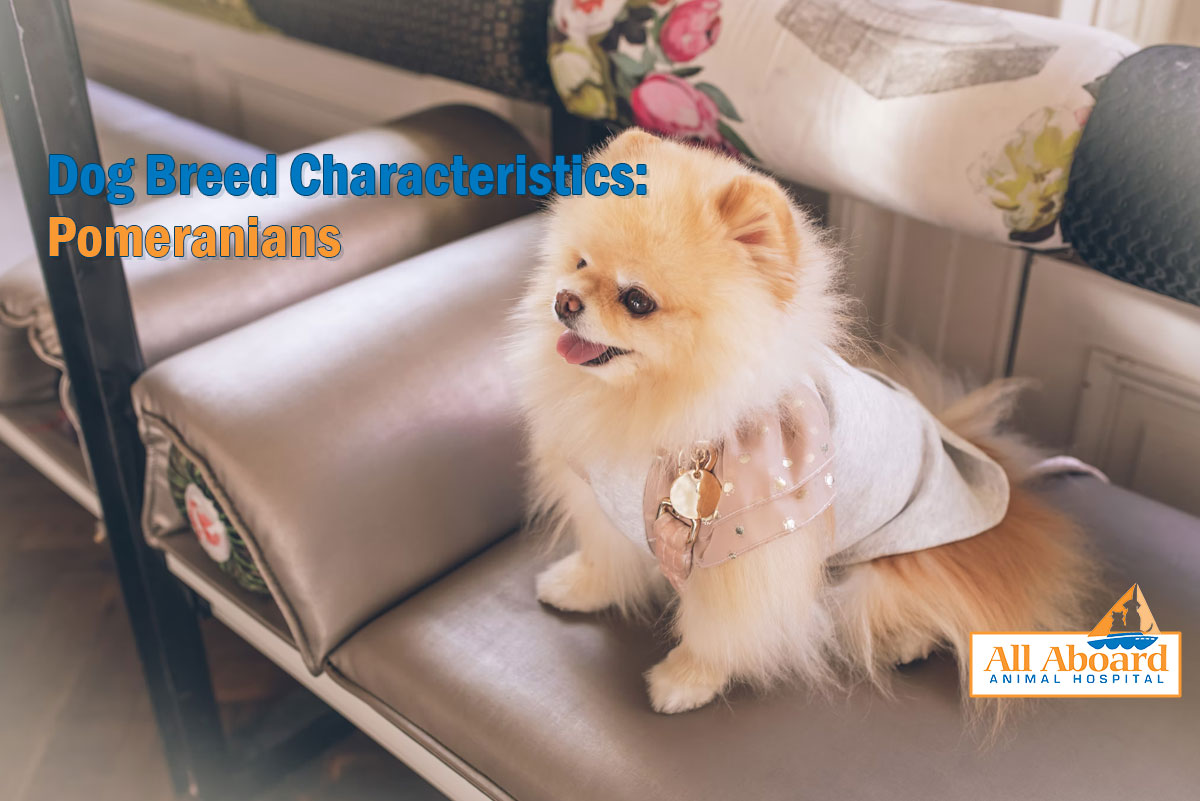 Pomeranians are a small, furry breed that is intelligent, outgoing, and friendly. They are one of the most popular breeds in the United States and are easy to maintain. They have a larger-than-life personality, which often makes them forget that they’re small. Pomeranians are great family pets that easily interact with children and are excellent companions for seniors! Here are the dog breed characteristics, personality traits, and background of Pomeranians.

From the beginning, Pomeranians were a combination of companion and guard dogs.

Pomeranians were first bred in Pomerania, Germany in the 1800s and started as large dogs. Queen Victoria was captivated by the breed, and eventually, the Pomeranians grew in popularity when she allowed her own Pomeranian dogs to be exhibited for the first time in a conformation show.

Due to Queen Victoria’s adoration of the breed, English dog enthusiasts were inspired to breed Pomeranians to even smaller pets. As the tiniest member of the Spitz family, the Pomeranian has a big personality. The breed comes in an assortment of colors, including cream, white, red, brown, and orange.

In today’s times, the Pomeranian is one of the most sought-after breeds in the United States.

While they are small in size, Pomeranians don’t mind taking on other larger dogs, and they will even bark at the other dogs if necessary. Pomeranians are friendly and outgoing dogs who are loyal to their families and great with children. Their high intelligence allows them to excel in obedience competitions.

They are very inquisitive when it comes to their surrounding environments and due to their extroverted personality, they easily interact with other animals. Pomeranians are very active and love taking walks, so you will need to make sure they exercise daily. They also make great companions for senior citizens due to their compact size and high alertness.

These pint-sized balls of fur have characteristics, appearance, and traits to look out for, such as:

Dog Care and Exercise Needs of the Pomeranian

To sustain the luxurious coat on the Pomeranians, they will need their hair brushed frequently. Their nails also need to be trimmed regularly. Pomeranians are not the type of dogs that want to sit in the house all day. They need routine exercise such as going for walks, running, and playing. When taking them for walks, be mindful that they have heat sensitivity.

Pomeranians are not easily house trained which is why crate training is a recommended method. Since they have a short attention span, training should be fun and short. You should feed a Pomeranian dog food that’s rich in quality. Home-prepared foods are fine as long as the diet is in sync with the dog’s age.

Dog Care at All Aboard Animal Hospital

Pomeranians sometimes forget that they’re small and have no problem challenging larger dogs. While they tend to bark a lot, they are great for apartment living and seniors. The adorable, playful, friendly Pomeranian is a wonderful family pet that is irresistible.

Like other dogs, Pomeranians are considered members of the family. If you’re looking for a Veterinarian in Pompano Beach, FL who is experienced and compassionate, contact All Aboard Animal Hospital at 954-785-7780 to schedule a veterinary appointment today.